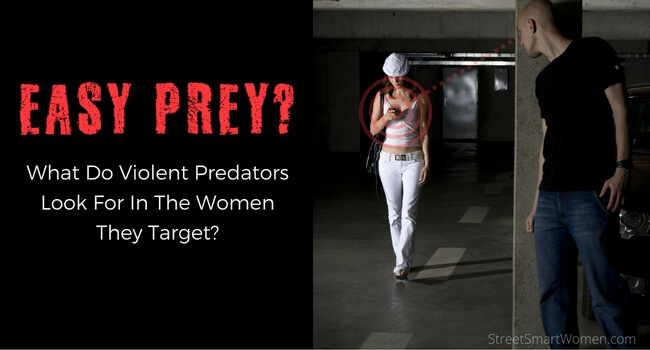 10 Jul Easy Prey? What Do Violent Men Look For In The Women They Target?

Have you ever wondered why one woman might be marked ‘easy prey’ over another?

Why is a petite woman in skimpy clothing overlooked while a heavy-set woman wearing jeans and a t-shirt selected?

Although it’s creepy to think about, violent men have an almost uncanny sixth sense when it comes to detecting vulnerability.

And while most women have no clue about how frighteningly intuitive the minds of dangerous men are, by the end of this post, you’ll no longer be one of them.

Much of what you will learn may seem to go against everything you’ve read before. But as we begin to dig deeper, you’ll understand why some of the things you do naturally (such as avoiding eye contact), may be signaling that you’re easy prey.

Because just as criminals ‘case’ several homes before they commit their crime, dangerous men pick up on cues to help them ‘select,’ who they target.

And researchers are learning more and more about the tactics used by perpetrators, and the similarities in personality traits, body language and dress of the victims they select on the street.

Ready to learn more? Read on … 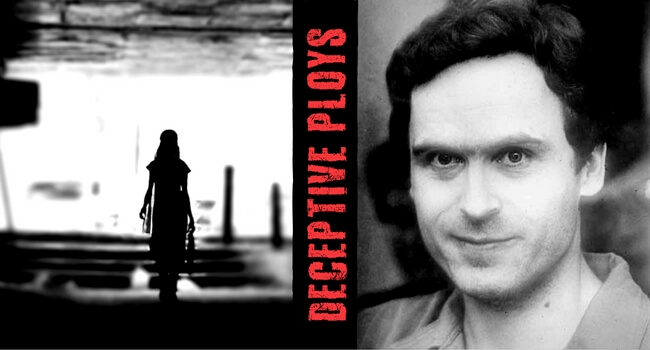 His Ability To Mask Deception

Have you ever heard of Michael Ross?

Reporter Karen Clark said that if she was walking in a dark alley and heard footsteps approaching, she would have been relieved to see the handsome “boy next door” Ross approaching.

She said this following a death-row interview of Ross who had killed and raped at least eight women.

What about Ted Bundy?

using a fake broken limb and playing on the sympathies of women to help with his groceries. Helpless-types can be just as dangerous as the hooded punk standing on the street corner.

Long before a victim becomes aware of his presence, an experienced predator is already going through his initial evaluation, often referred to as the interview process.

He makes mental assessments of would-be targets and their level of vulnerability, before he determines whether or not to act.

With ploys such as those used by serial killer Ted Bundy, the act of distraction comes from his deceptive ploy of acting vulnerable and needing help. Playing on the helpful and sympathetic nature of most women, this is an especially effective tactic.

#The Truth About Your Sexy Outfit

You know the saying, “Wear that (low-cut dress, mini skirt, etc.,) and you are asking for trouble.” But is it really true?

Studies show it’s not. In fact an entire campaign known as International Denim Day started, after a Supreme Court in Italy overturned a rape conviction because the Justices argued that since the 18 year old girl was wearing tight jeans, she must have helped the rapist remove them.

Women who are the victims of sexual violence are just as likely to be wearing jeans and a t-shirt,  as they are other outfits.

Yet this goes against everything women are taught at a young age: don’t dress in a way that’s provocative or you’re asking for it.

From a predator’s point of view, women who wear provocative or skimpier clothing are more confident. And confidence, to a would-be rapist, is a red flag.

a confident woman, head held high in a short skirt,

to a self-conscious woman wearing jeans and a sweatshirt, shoulders slumped with no eye contact.

The second woman’s demeanour screams, “submissive,” to a would-be attacker. 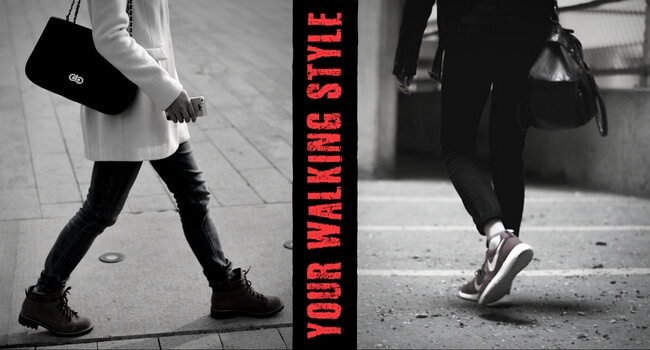 Is Your Walking Style Revealing More Than You Bargained For?

#What does your walking style tell an attacker?

A fascinating study conducted in the early 80s called the Grayson/Stein Study, gave a behind-the-scenes look at how predators choose their would-be victims. As part of the study, convicted violent offenders were shown video clips of pedestrians in a busy metropolitan area. Within seven seconds the offenders selected who they would choose to assault or violate based on the video footage alone.

Surprisingly, nearly all the would-be victims were the same handful of people.

For the most part, even the perpetrators themselves weren’t sure why they would have selected these individuals.

But when researchers analyzed the videotapes thoroughly, they discovered similarities in the would-be targets.

The Pace & Coordination Of Your Walk

“Come on, hurry up!” an anxious mother tells her three-year old. As usual, the toddler is dragging her feet, in no rush at all to get to the next store.

While frustrating for parents, a slow, meandering pace can actually be dangerous for women.

Would-be victims walk slower in general than the average person; they don’t appear to be “on a mission.” This information came from the Grayson/Stein Study and provides a fascinating look into how a woman’s walking style correlates with her chances of being assaulted.

Attackers are also more likely to assault people who move with an unnatural walking pattern, women who use a significantly longer or shorter stride than average, for example.

Movement of the feet in an unusual way such as dragging or shuffling, alerted his ‘law of the jungle’ primal instinct that she is not an Alpha.

Body language also indicates that a person is an “easy mark.”

The study showed that walking in a way where someone’s arms moved in a disjointed way from their bodies, increased the chances of attack. Again, alerting him that she is not an Alpha Female.

Finally, a submissive stance – such as downcast eyes or a slumped posture – is often present. 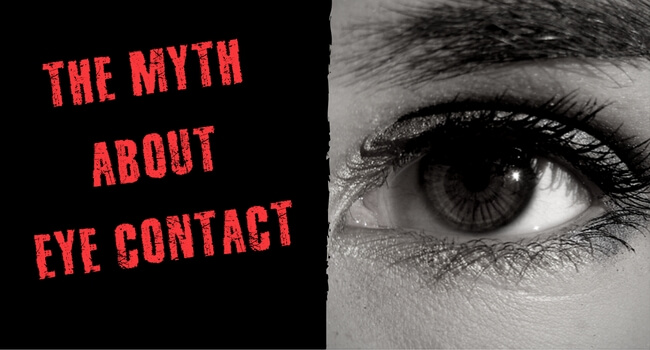 #Does looking at a predator really make him more likely to target you?

Many women feel intuitively that making direct eye contact with someone of the opposite sex sends a clear message, “I’m interested.”

This is one of the reasons that your first instinct, when you notice a man staring at you, is to look away. And while yes, this often can send a message to the sleazy guy on the other end of the bar looking for an easy pick up, the opposite is true when it comes to sinister intent.

In this situation, eye contact signals something quite different. It says, “I see you and am aware of you.” This is exactly the kind of attention that the attacker does not want. Attackers want to use the element of surprise – often their very strongest tactic – to their best advantage.

When you make eye contact you’re showing that you are not submissive and therefore not the easiest of targets.

Caution: In some non Western cultures direct eye contact with a male can be perceived as an invitation, no matter what the circumstances are.

How To Make Sure You Fail The Interview Process

Author Geoff Thompson originated this concept on how attackers disguise their ill intent.

Dialogue:  This creates a distraction that is often a ploy to get closer to the victim. For example: by asking a question, some women will stop, which gives him a further opportunity to evaluate her level of awareness. And more importantly, her stopping will effectively close the distance gap, bringing her into closer range.

Deception:  This is where his ill intent is disguised by his seemingly harmless demeanor, until it’s too late.

It may be in the form of his boy-next-door good looks (as was the case with Michael Ross), someone you would gladly allow to help you home with your shopping.

Or in the case of Ted Bundy, his charm and ability to switch between characters. From playing the injured man with his arm in a sling needing help. To the fake fireman or police badges he showed, in order to establish trust.

Distraction:  This tactic is used to divert the woman’s attention, so that he can successfully carry out his intent. The diversion could be in the form of questions, or in the form of either offering or needing help. All of these tactics distract the woman from her greatest survival signal – intuition

Destruction:  This occurs when the predator has evaluated that it’s safe to move forward with his intent. He has engaged the woman in dialogue, she has fallen for his deception and is now distracted. Next comes his most powerful card: the element of surprise.

Men with sinister intent are well aware that a woman’s natural instinct is to flee if she senses danger. They are also smart enough to know that if they can lower the woman’s guard enough, she is more likely to freeze when the violence catches her by surprise.

* Never question your intuition when it comes to a stranger. Women who have survived violent attacks report that although they sensed something was ‘off’, they continued to rationlize that he seemed harmless.

* Always question the context of engagement. Am I alone, am I isolated? Normal decent guys understand that a woman on her own is going to be wary of him.

* If someone feels ‘off’ and you are at a safe enough distance from them, stop momentarily and make direct eye contact. Make sure your body posture is strong and briefly face them.

* Be aware of when your emotional state is likely to increase your risk of being a target i.e leaving the house or a venue after an argument.

* Download a personal safety app that has the ability to let your pre selected contacts ‘follow you’ when you’re alone and isolated.

* If you’re feeling on edge in your surrounds or think you’re being followed, arm your safety app.

* If you’re faced with a surprise attack and a weapon is being used to force you from your current location, know that any move to a secondary location is going to give him complete control.

Although it’s chilling to learn about the ‘sixth sense’ dangerous men have for targeting their victims, it’s even more disturbing that most women don’t know the less obvious signs of what makes them vulnerable.

Did you find the Grayson/Stein study insightful? Have you ever felt that you were being ‘sized up’ from a distance and acted on it?

Did we miss anything?

We’d love to hear your stories and thoughts in the comments below.

And be sure to share this post to help as many women as possible avoid becoming an easy target for violent attacks.