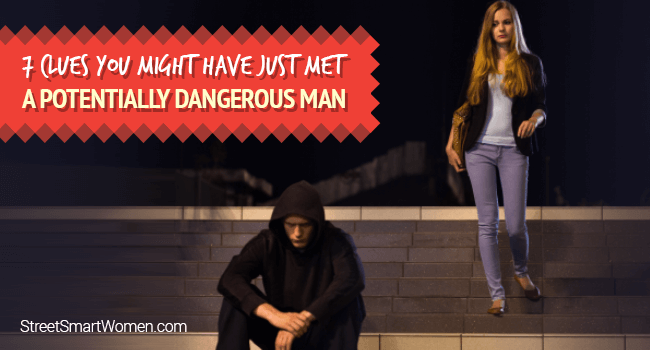 As a woman, one of your greatest gifts is your intuition. Yet why do we hear countless stories from women who have been victims of violent crimes, who ignored their intuition? The very warning sign that was designed to keep them safe…

As you will learn from this post, much of this is about social conditioning.

When a man shows up being a little too charming, nice or helpful most women are not conditioned to say,

“Thanks but did you not hear me say f’off the first time?!”

Instead, you enter into a potentially deadly dance between the politeness you’ve been conditioned to offer, instead of paying attention to the warning bells you’re receiving.

You know the feeling…

that your heart is in your mouth,

feeling like it’s hard to breathe and holding your breath,

or noticing the hair on the back of your neck is standing up.

Whilst the men who are capable of every woman’s worst nightmare, know exactly how to lure a woman into a dangerous situation, the very ways they can do so leave clues.

So here are your 7 potentially life saving clues that will help you know how to avoid violent attacks.

One of the fastest ways to lure a victim, is to get them to trust you. Even if it’s only for 30 seconds. And Forced Teaming is a way of establishing trust pre maturely, because it quickly enforces a feeling of ‘we’re in this predicament together’.

Two people miss the last train or bus for the evening. Both of them are now facing their own predicament on how to get home.

When forced teaming is used, one stranger might ask “How are we going to get home?”  The emphasis here is on the use of the word ‘we’.

Most women are too polite to say “Um, what do you mean ‘we’, I don’t give a damn how you’re getting home,” and predators understand the social norms that keep us from being rude.

Far from being a coincidence, forced teaming is one of the most covert forms of manipulation. The predator prematurely forces trust when moments ago none existed.  It’s an extremely subtle violation of your personal space, and the predator uses this technique to test how easy it will be to gain control of the potential victim.

“The detectable signal of Forced Teaming is, the projection of a shared purpose or experience where none exists” – GDB

Charm & Niceness – To Control By Allure Or Attraction

Charm is a learned trait and women would be served well to look beyond the charm and kindness to determine if there’s an ulterior motive.  If a total stranger appears charming, ask yourself,  “Why is he so hell bent on  trying to charm me?”.

Because, just like establishing trust prematurely, charm is no accident.

Remind yourself that charm can be a form of control because people don’t think “charming and bad guy” in the same moment.  It’s easier to let down our defences and turn off our intuition when we think someone is charming.  Which is exactly why he uses it, the intention is to disarm you.

This also applies to someone who is excessively trying to charm you on a date and the feeling that “he seems nice enough but like he’s trying too hard”.

Too Much Information (TMI!) – A Sign He Wants To Deceive You

Have you ever met someone, maybe made eye contact or shared a quick smile, then it seemed like you suddenly couldn’t get rid of them?

Although you’re itching to get away, you feel trapped. And since you don’t want to be rude, you feel stuck listening to the ‘story’ they’re telling you. In most cases, that person (for whatever reason) may just have needed to find some way to connect on a human level.

However, someone volunteering too many details when they weren’t asked for, can be a way of distracting you from what your intuition otherwise might have picked up on.  So, pay attention to what your gut is telling you.

When people are telling the truth, they don’t feel the need to back up what they are saying with additional details.

When people lie, even though you might actually be buying into their story, they aren’t convinced that they sound credible. Hence they add additional details to support their lie.

A stranger who magically appears and happens to be heading to the same floor of the building you are, strikes up a conversation. Although something feels off to you, he appears to be “nice” enough as he tells you how bad he feels that he is hours late on the promise he made to feed his sisters dog.

While polite exchanges between people are common, a stranger volunteering too many details about why they are heading to the same floor, should be a warning bell.

Typecasting – Criticisms That Will Get Him Everywhere…

This is a highly sophisticated way of manipulating someone and tricking that person into proving they are not what the manipulator has just suggested they are.  Basically, no one really cares to be “labeled”, as it’s a bit of an insult.  So with Typecasting, the manipulator purposely says you are one way & you feel compelled to prove them right or wrong.

“You don’t seem like the type of woman who’s afraid of trying new things.”

The woman, wanting to rid herself of the label, then sets out to show him she is not afraid of trying new things.

Or, the man might say, “You don’t come across as someone who is boring, do you ever do anything spontaneous?”

In both examples the slight insult is designed to compel you to engage.

Sadly, even when women feel creeped out by such highly manipulative questions, they are conditioned to answer politely. And in doing so, they send off a signal that they are able to be controlled.

Loan Sharking – Luring You Into Obligation

This is a strategy that is used to play on a woman’s sense of obligation.

If the man can create a situation where the woman feels like she owes him, she is more likely not to ask him to take a hike.

Great examples of this are forcing help on you when you didn’t ask for any help. The emphasis here is on forcing help!

An extremely important point that differentiates dangerous men from someone who is genuinely offering help, is respecting boundaries.

As you will read in clue number #7 ‘NO’ is a complete sentence. If a stranger attempts to ‘negotiate’ your refusal for unsolicited help – get the heck away asap!

Whether he noticed you are struggling to manage the 2nd floor with your shopping bags, or juggling getting the stroller in your trunk, pay attention to his insistence on helping you.

If the first attempt to manipulate the woman doesn’t work, it is often followed up with Typecasting.

“Come on, I’m just a nice guy trying to help a pretty lady – are you going to fault me for that?”

Your response at this point, is helping him assess whether he can or can’t, lure you deeper into his control.

The Unsolicited Promise – A Signal Of Questionable Motive

This signal should alert you!

It means that someone is trying to convince you of something.  Honestly, how many people do you know who’ve actually gone out of their way to not promise anyone anything?  It’s a big and personal commitment to promise another person something.

But… He needs to convince you because he senses your doubt.

So if someone says…. “I just wanted to be able to help you”, followed by “I promise”,  the purpose is similar to offering too many details.  It’s yet another attempt to get you to trust him.

The emphasis here is on:

1.  There was no legitimate reason for the person to promise you anything. 2. You never asked for a promise in the first place.

So the question to ask yourself is, “What’s the point to a promise I didn’t ask for?”

Discounting The Word ‘NO’ – A Word That Should Never Be Negotiated

We’ve all heard the saying “no means no.”

Rape and violence are about power and control, so if a complete stranger is trying to control you, let this be an alarm bell.  Many women don’t understand how important a refusal to hear the word “no” is, as an indicator of someone whose intentions may be to harm you.

“When you say no and the other person discounts it, you should think immediately, why is this person trying to control me? Because NO is a complete sentence.”

SEE ALSO: The Gift Of Fear – What Every Woman Ought To Know About Her Ability To Predict Violence – By Gavin De Becker

One of the most dangerous things a woman can do is say no, and then weaken her stance by relinquishing it. A stranger with sinister intent is looking for any foot in the door he can get.  So by saying “no thanks I don’t need any help” and then caving in a few moments later, you send a signal that you can be controlled.

With a stranger, the word ‘no’ is not negotiable. And your safety and life may depend on your NOT giving in to another attempt on their part.  They are testing you to see if you’ll be a good victim for them.

Bringing The Potential For Violence Into Context

As the author of The Gift of Fear (Gavin De Becker), pointed out – “context is everything.”

While many of these tactics are often used without harmful intent, your situation and surroundings are what brings them into context.  If you’re alone and isolated and approached by a man, you are vulnerable.

If he is overly friendly, remind yourself that his charm and niceness likely has a motive. That motive could be as simple as a lame attempt to chat you up for a date, or it could be much more dangerous.

If something feels off, it probably is.  Hesitation and doubt are gifts from your intuition.  Listen to them!

Have you ever been in a potentially dangerous situation, where your intuition picked up on any of the above?  If so, we’d love to hear your story in the comments below.

And please share this post to help other women understand the warning signs of being lured into a violent attack.

You could help save someone’s life…