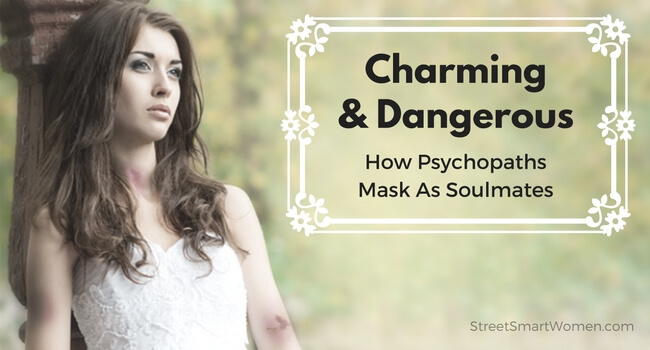 Till death do us part… Ooh the romance those words conjure up!

You’re ecstatic as you ponder how quickly you fell in love, and how soon you’ll be starting your life together.

And these are the thoughts that should be filling your heart – as long as your soul mate is not a psychopath in disguise.

But if your relationship is moving at an abnormally fast pace towards commitment & something isn’t sitting right, then you might want to read on…

If you knew that one of the warning signs for abusive relationships, was actually the ‘pace’ of the relationship, would that set off an alarm bell for you?

Would it at least get you to dig a little deeper into why this seemingly charming man, needs your commitment so quickly?

If so, it’s important to know that there is a pattern to relationships that become dangerous. And the warning signs are there from the beginning.

Once Upon A Time…

Just like a criminal cases several homes before he decides which one to target, predators are constantly on the hunt for their  ‘ideal’ woman. Yet unlike the normal partner selection process, a predator’s criteria is quite different:

The pace of the interview moves quickly, because his fragile ego cannot function without securing a supply source for his insatiable need for control.

So he cycles through woman after woman, interviewing and discarding until he narrows his focus on one (or a few) that meet his rigorous selection criteria.

In contrast to the easy target on the street, or the easy to break into home, troubled and highly manipulative “soul mate” in disguise targets incredibly strong women.

Deep down, he knows that an easy conquest is not going to be able to endure his needs. At least not for the long haul…

Once he finds a woman that appears to meet his pre selection criteria, he begins testing her boundaries.

High on his checklist are her super traits:

If the woman passes the interview phase, she experiences the love bombing phase. And this is only the beginning of the manipulative tactics yet to come. 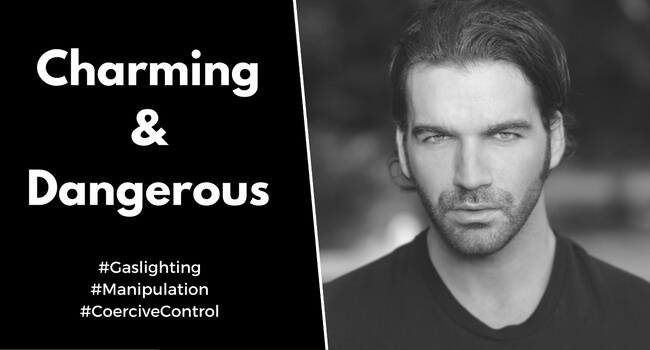 How The Psychopath Masks As Her Soul Mate

If you’ve ever spoken to women who’ve survived abusive and potentially lethal relationships, whilst their stories are unique, the warning signs are not.

“He just understood me in a way no-one else ever had, I thought he was my soul mate.”

What they miss, is that during the psychopath’s dysfunctional childhood, he learnt to become a chameleon. His shaky reality was void of safety, and could only be stabilised by mastering the art of manipulation & control.

And master this he did!

His earlier years were spent meticulously studying every interaction that rewarded him. He becomes so skilled at mimicking human emotions, that his charm & lies are able to deceive law enforcement, psychologists & even criminal profilers.

By the time a Sociopath, Psychopath or Narcissist is old enough to enter the dating scene, he has developed a highly refined ‘sixth sense’ for selecting victims.

It’s only a matter of time…

Mr charming has been hiding a secret about himself, and keeping up his deceptive mask is exhausting. He needs her emotionally invested and he needs this fast.

So the intensity and fast pace of the relationship increases, along with the love bombing.

As the predator continues his mask of deception, his chosen prey is swept off her feet.

If she makes it through the intense love bombing and into a committed relationship, she eventually faces what will possibly become the biggest shock she has ever experienced…

…The private unveiling of his mask

You all knew how amazing he was, and how deeply in love we were. I was totally swept off my feet in a way that’s hard to describe.

I felt like he understood me in a way that no one else ever had.

He was so attentive, so witty, so charming and so loving, it almost felt too good to be true…

Never in my life had I met someone who cared about what was important to me in the way he did.

Never in my life had I experienced someone who listened to my every word as though the world depended on it.

And now, never in my life would I wish this living hell upon another human being.

I feel so ashamed, confused & crazy, that I don’t even know where to start…

He continues to tell me he loves me, yet most of my waking moments are spent in constant fear of him. He tells me I’m crazy, and so I’ve begun to doubt my own sanity.

SEE ALSO: What Are The Warning Signs For Men Who Murder Their Partners?

I don’t expect you to understand what happened, but I woke up one day and saw a former shell of myself in the mirror. Like someone had destroyed my soul, and I was no longer me.

Through some slow, corrosive process, those of you nearest and dearest to me were no longer there. He had long ago found reasons to make all of you distant memories. He told me our ‘love’ was special & it could only survive if we were alone.

I’m afraid that because of how loving and charming you saw he was,  some of you might not believe what I have to say.

I know one thing for sure…

Why Doesn’t She Just Leave? 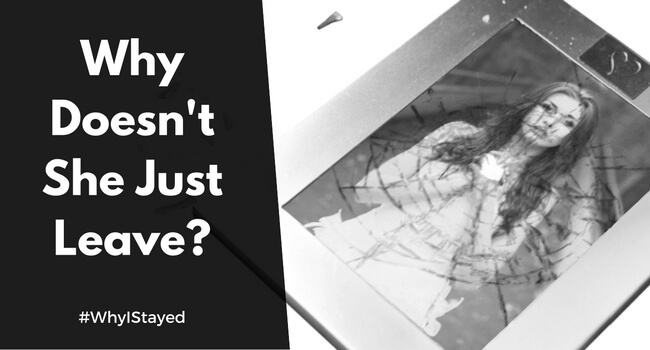 From Fairytale Beginning To Living Hell

If you could only understand the crazymaking…

“But he was so sweet, so charming, so loving, I must have done something to cause this… If I just try harder, if I just love him more, my soul mate will return.”

As she continues to hope (when none exists), she becomes entrapped by her own super traits. The very reasons he selected her.

By this stage, the woman’s self worth has been completely eroded, her intuition dulled, and her self preservation mechanisms become dangerously low.

Everything that he “loved” about her, is now perceived as a threat to his power, and it must be eliminated. Yet as she desperately tries to figure out how to stop his abuse, it continues to escalate despite her attempts at complying with an ever increasing set of new rules.

Then just as she reaches breaking point, there’s a new ingredient thrown into her turmoil:

Momentarily he reverts back to the mimicking of emotions and glib charm he used in the luring phase of the relationship.

The brief moments of relief are celebrated, as hope & joy return. All the while pulling her deeper and deeper into a cycle of trauma bonding, that closely resembles the Stockholm Syndrome. His isolation tactics have ensured that her only moments of joy, are relief from his abuse & so she misses the devastating truth:

His rules are an ever changing minefield, and no amount of compliance will end his punishment.

Every time she speaks, breathes, asks a question or moves, she causes him an injury that leaves him feeling rejected:

…In his warped reality, there is no such thing as Mr & Mrs, there is only Mr, and an extension of Mr. He has no concept of where he ends and she begins.

He cannot afford to acknowledge her as separate to him, because the pain is equal to him being severed from half of himself.

This bizarre, backward way of connecting to her, is just one of many warning signs that he may be suffering from a pathological disorder.

And the degree to which this mental disturbance exists, is key to the level of risk the woman is going to be at when she tries to leave him. 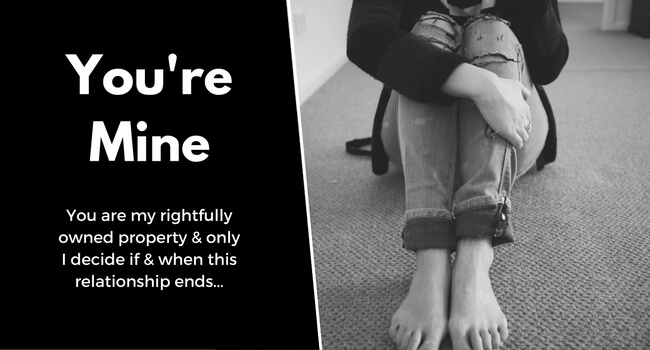 “This Is Marriage & The Only Way Out Is Death”

Quoted directly from a woman recalling her husband’s words, in the book – The Gift Of Fear.

The more the woman represents an extension of himself, the higher her risk.

The higher his perceived ownership over “his woman” – the higher her risk.

And since controlling ones rightfully owned property is not against the law (in his mind), now we have a ticking time bomb…

The authorities and everyone in a position to help, miss the clues that could help assess the level of danger she is in:

The pathological disorder – driving his escalating levels of control

His backward hardwiring has likely already established that he owns “his woman”, as though she is in fact a part of him.

Yet since there aren’t any consistent protocols in place to help law enforcement & well meaning friends assess her level  of risk, she is dangerously led down a path of false security. Unaware of his pathology herself, she puts her trust in the legal system to protect her.

Yet as court rooms continue to overflow with women who’ve been directed to obtain restraining orders, their cases are rarely heard by anyone qualified to evaluate whether this is enough to keep them safe.

It’s a bullshit blanket approach, that doesn’t take into account that many abusers believe they are above the law.

Whilst we respect that law enforcement are operating according to the training they are provided with, this ‘one size fits all’ approach to intimate partner violence leaves many women in an increasingly dangerous situation:

…When is the last time anyone ever heard of a sociopath or psychopath being deterred by a piece of legal paper?

Or someone with an antisocial personality disorder being reformed by a domestic abuse program?

As a result, millions of women each year are being left vulnerable by legal systems that are failing them. Because their cases are not being individually assessed by professionals who are qualified to diagnose Anti Social Personality Disorders. And victims are not being directed to a lethality risk tool.

On top of this, we have journalists who continue to mislead people with romanticised click bait… 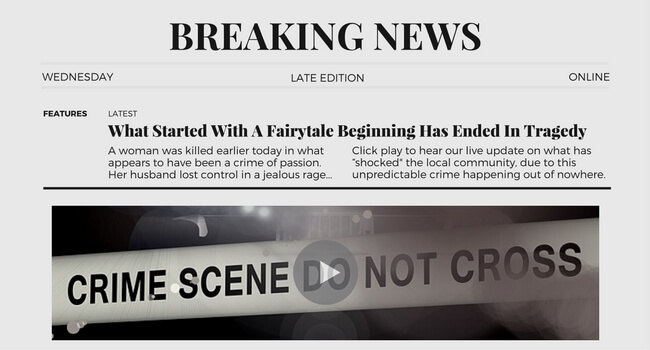 The Most Predictable Of All Murders – Intimate Partner Homicide

Neither domestic violence, or intimate partner homicide happen out of nowhere. And the media are in a position to help accurately report the facts: 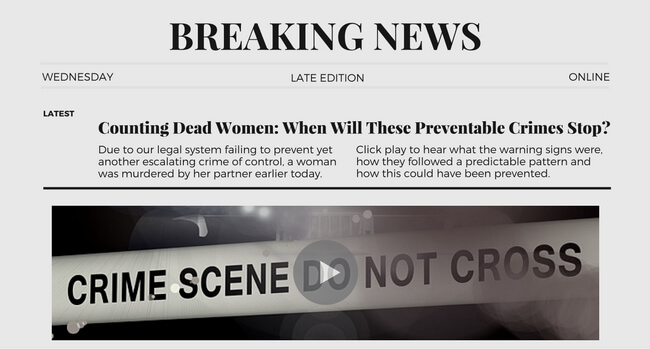 A solid resource for accurately reporting domestic violence crimes has been created by the Iowa Domestic Abuse Death Review Team. Journalists can access the publication “Domestic Violence: A Guide For Media Coverage” here.

To help educate and empower young people on the warning signs of relationship violence, they can link to The One Love Foundation here.

Their dedication has led to the development of an incredibly powerful education video – Love Labyrinth:

One Love was founded in honor of 23 year old Yeardley Reynolds Love, with an ambitious goal of ending relationship violence. Their 40 minute Escalation workshop is currently being rolled out in campuses across the US.

To bring an Escalation Workshop to your country, or make a donation to help translate it into other languages, get in touch with One Love via the link above.

Friends and family, health care professionals and legal advisors concerned about the level of danger a woman is in, can access the Danger Assessment Lethality Risk Instrument here.

Over to you… Did you know one of many early warning signs for Intimate Partner Violence was the pace of the relationship? Or what about escalating levels of control?

Add your comments below to help support other women to #BreakTheSilence.

Sadly, most victims of abuse only understand they were in an abusive relationship after it ends. By sharing this post we can change this. Please help spread the word that any form of abuse is not ok.